How We Squared the Circle

“The geometer’s aim therefore, is to imitate the universe symbolically, depicting its central paradox by bringing together shapes of different geometric orders, uniting them as simply and accurately as possible and thus creating a cosmic image.”
-John Michell 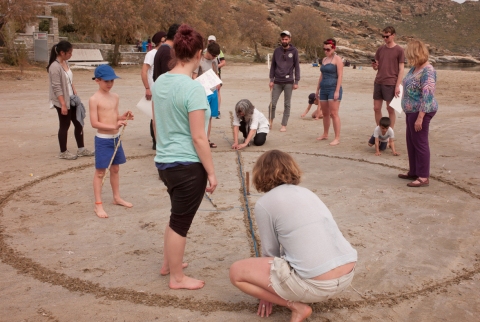 The Ancient Greeks have long been admired for their geometry. The tools of the trade of the Greek geometers were the compass and straightedge. Yet the simplest puzzle, drawing a square of equal area to a given circle forever eluded the greatest of Greek minds. Only in 1882 after 2,400 years of attempts the task of squaring the circle with compass and straightedge was proven impossible.

Before the Greeks, Egyptians had been building pyramids and measuring the land with pegs and knotted ropes. So, given that the word geo-metry literally means ‘earth measurement, what if we reverted to the tools of the Egyptians to draw our circles and squares upon the earth? 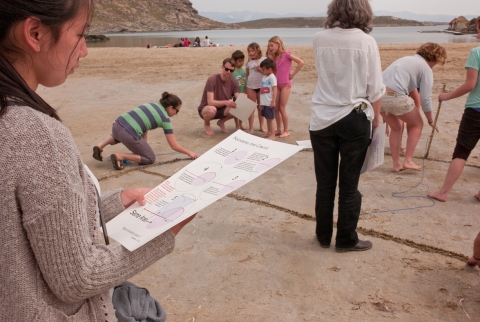 In 2013 my students  and I decided to draw out this problem on the beach following a diagram illustrated in Jon Allen’s book, “Drawing Geometry”. Then this year I was contacted by a mathematician from Australia named Jonathan Crabtree who read my previous post with great interest.  Jonathan’s vision was to have his simple solution for squaring the circle drawn on Greek sand in honour of Archimedes. Legend has it that Archimedes, author of “The Sand Reckoner”, may have been drawing circles in the sand at the time of his death at the hand of a Roman soldier. Jonathan wondered, “Could Archimedes have been squaring the circle?”

By combining the tools of the Egyptians with the ideas of Archimedes, Jonathan has proven it possible to square the circle to perfection. This last Saturday we gathered in the Eco Park of Paros where we had a flat stretch of damp sand and plenty of hands to help.  My students produced a beautiful  (and accurate) drawing and we were pleased to honor Archimedes and help bring Jonathan’s vision to life.
We are star-stuff contemplating the stars.
-Carl Sagan 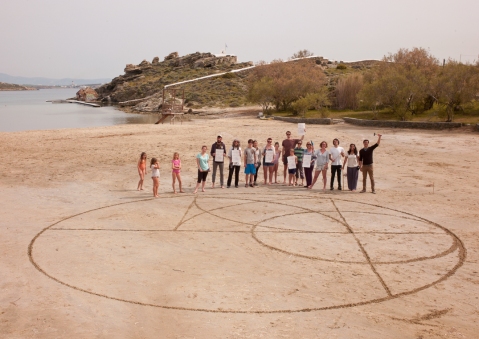 You are currently reading How We Squared the Circle at The Chronicle.