Illustrating the Iliad Exhibition and the Book

“Illustrating the Iliad” opened on the 30th of July at the Aegean Center and just recently closed on 17th of August. The exhibition was very well attended and it was interesting and rewarding how many people returned several times to view the work. There were 38 images, each with corresponding texts in English and modern Greek from the Iliad.

Printed wall-mounted summaries of the story helped those that could not remember the details of the events of the story. Pleased with the many compliments I received I was also delighted that so many people mentioned they felt moved to reread the Iliad after seeing the works.

A book was also printed in Athens to accompany the exhibit. It includes the images of the show and the excerpts which inspired them in three languages, English from the translation by Fagles (published by Penguin), the modern Greek by Maroniti (published by Agra) and the ancient Greek (found in Homeri Opera from Oxford University Press). Jeffrey Carson wrote the preface and it includes an artist’s statement. The book is published by The Aegean Center Press and can be ordered via a link (soon to be) found on the Aegean Center’s website. 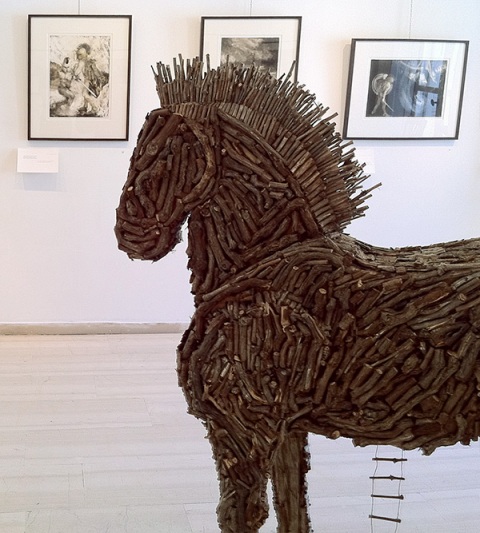 My son, Gabriel, sculpted a Trojan horse which held a place of prominence in the main gallery and which the children visiting found particularly alluring. I saw many of them on their hands and knees looking up into the horse’s belly from which dangled a rope ladder. Although the incident of the Trojan horse does not occur in the Iliad it did not seem right to exclude it entirely. Gabriel also made a short video of the monotype process which helped to illuminate my process. Thank you to all my students and friends who have inspired me and informed me over the years. I appreciate all of you who attended the exhibition, and for those who could not attend and sent their warm words of good wishes and congratulations, I thank you all of you for your joyful presence.   Jane Morris Pack 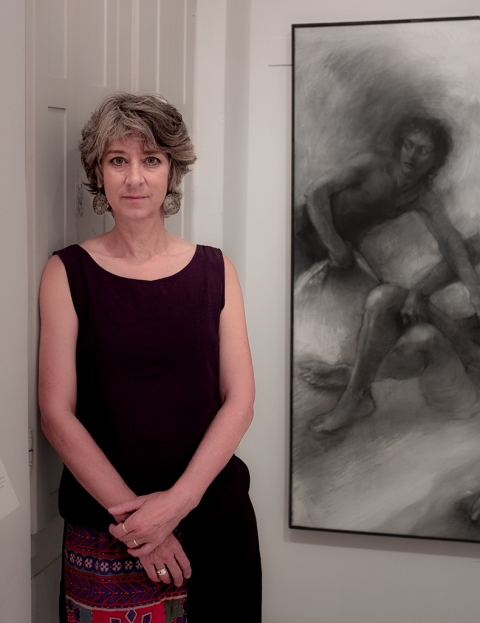 § 4 Responses to Illustrating the Iliad Exhibition and the Book

You are currently reading Illustrating the Iliad Exhibition and the Book at The Chronicle.