Self Portrait by: Avery Oatman

Hello! My name is Evie Elman and I have recently fallen in love with Printmaking.  I am one amongst six in our intimate class, and Jane Pack is our very experienced teacher. Because we are all taking intensive courses such as oil painting, figure drawing, basic drawing, Greek Literature, creative writing, and more for others (but that is my schedule) – printmaking falls but once a week and it is 3 hours long.

We start each class learning about the history of printmaking and looking at classic prints by renowned artists. This gets our creative juices bubbling, and helps us begin our hands-on work period where we etch and print with an empowering old printing press. We crank the wheel, we roll the ink, we dip things in acid,  we roll hard ground on top of a hot plate over an open fire – though not in that order! We are pretty cool. We have also learned how to make mono types –  a refreshing approach, with a similar effect, all involving the press and ink.

Printmaking is a fascinating old process, one that requires a sense of release. You must be free and prepared for the unexpected surprise that may show up on your print, though accidents 95% of the time add something delightful. This freedom of not having total control is exciting, and keeps me eager to produce. It feels like you are no longer working alone, but with the printing Gods, and together something beautiful will form. Cheers!

Illustrating the Iliad by Jane Pack

My recent work has been occupied with investigating and rendering  three dimensional space using vegetation and tree branches. Deep space, as in landscape, is not difficult to capture, but dealing with space a mere 6 inches to a foot is a more difficult proposition. I have been looking at Japanese and Chinese  screen painting for inspiration and what I have learned I can now apply to other work.

This winter I decided to undertake a new project which I  had dreamed of doing for many years. I want to illustrate the Iliad. This meant rereading Homer’s epic–I am using the Fagle translation–and thinking again about figurative work which I have not done in years.

Greek vase paintings are one of the high points of draftsmanship and one I return to often for inspiration. Their lively line work and human quality are incomparable and their deceivingly simple style shows a complex understanding of the human form. I wanted to use them as a resource without imitating them. I looked at John Flaxman’s work of the early 1800’s which take vase paintings as their starting point and are clear and accurate, dated now however, too stiff to our modern eyes.  Browsing the internet for additional resources of more recent work I found little other than photos of the Hollywood movie “Troy” and some bad comic versions of the story. 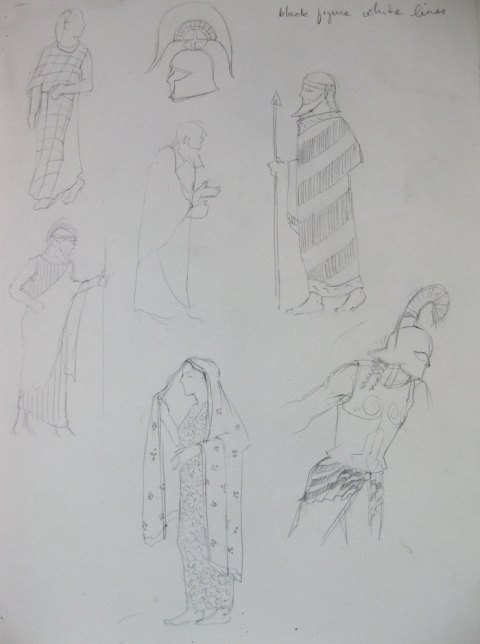 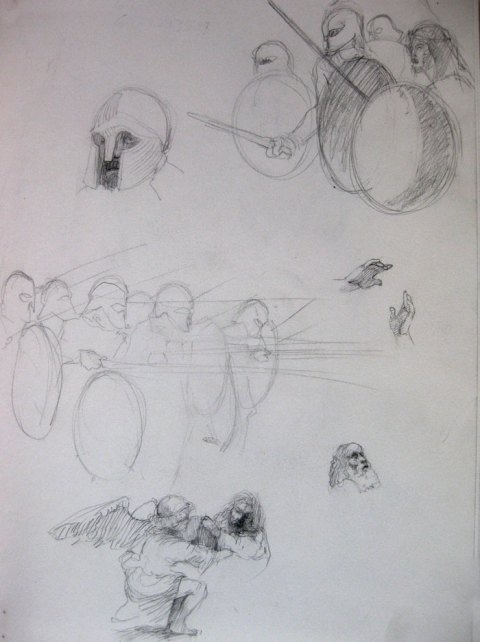 First I had to make a decision  as to the look of the armour and weapons as this is the most identifiable element to the story. The historically accurate type, of which there are few examples, are not familiar to the general public.  The boars teeth helmets and figure eight shields of 8th c bce Mycenae are, wrongly, not associated with the romantic ideal of the Greek warrior of the Iliad.  The vase paintings illustrating Homer in the 6th century bce  used the classical style armour of the time which became the conventional model. The heroes are frequently seen fighting nude which probably did not reflect reality but which gave the Greek artists a chance to reveal the human form as it was being perfected in the canon of the time. I  have chosen to inform my work from the vase painting style, so being guilty of historical inaccuracy myself.

The Greeks meet the Trojans in battle

Another consideration was the depicting of characters which every reader has developed in their own inner eye.  I felt it was necessary to keep the faces vague in many cases so as to leave as much as possible to the imagination of the viewer.  And painting Helen, the most beautiful woman in the world, poses problems which every generation has grappled with. See the story of Zeuxis for his version of the problem. 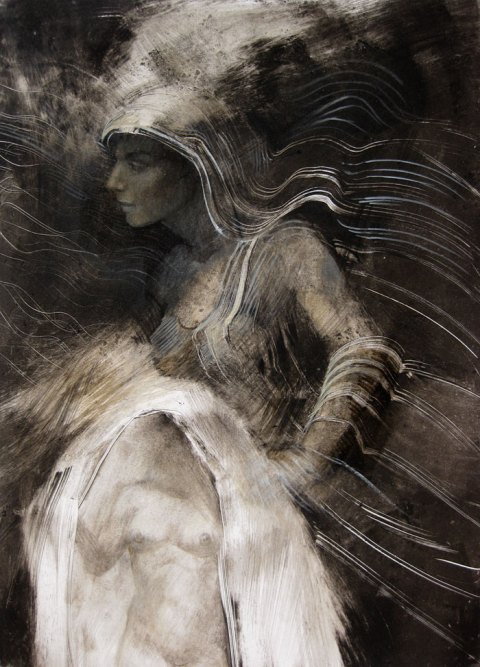 I wanted to use the printmaking press and do some monoprints just to generate ideas, but I liked the images I was getting and  decided to stick with this process.  Inking the plate entirely I then wipe out the image with cloth, fingers, the back of a brush, a stick for line. 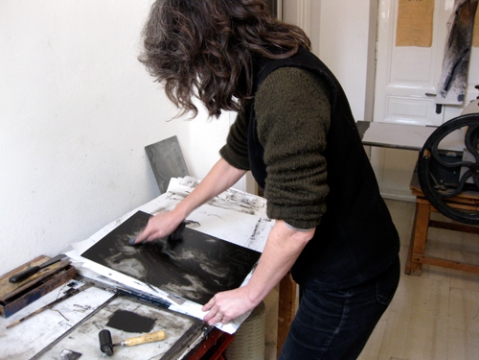 This method enables me to design in a very loose way the composition and re-sketch and wipe out innumerable times.  The process is so limited that it forces me to stretch my handling  but I like the small scale and the expressive quality I can get by dragging the ink around.  I have been adding tempera paint on top with a palette of just four colors, an earth palette essentially with black, white, raw umber and small amount of yellow ochre. These limited colors on the black ink give me control over opacity and transparency, warm and cool, and value.  I try to use these tools to vary the character of the illustrations but also to add space, movement and volume.  The limits I am imposing on myself demand a higher level of creativity, something I always try to stress to students; do more with less.

I will probably go on to do some oil paintings and mixed media drawings around this same theme.  Time is always in short supply but I hope to continue this project into the summer when classes are over. 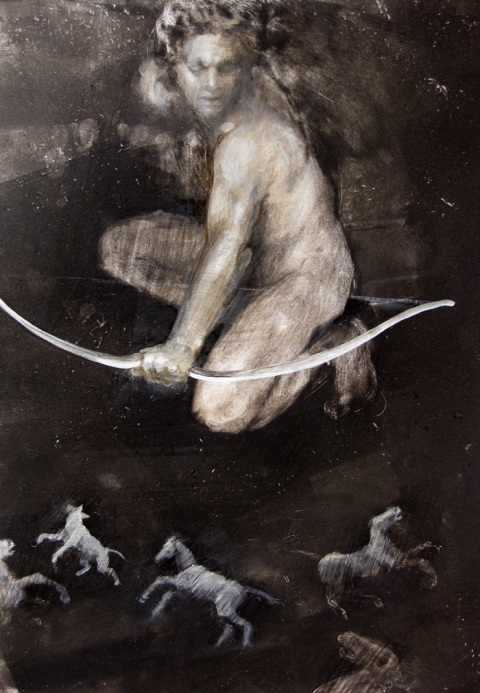 Apollo kills the dogs and horses of the Greeks

You are currently browsing entries tagged with Printmaking at The Chronicle.