The first subject that Jane discussed in Figure Drawing was that drawing is communicating your thought process. Drawing is representation, not depiction. My experience in the class has been forgetting my verbal identification with the figure, and learning to see it as formal elements.

The first three processes we learned were mass, energy lines, and constellations. Mass gives the figure weight and proportion. Energy lines illustrate the envelope of space around the figure, movement, and placement on the page. Constellations help to translate the figure from 3D into 2D, by giving you the placement of the figure on the picture plane. When warming up, or in the beginning of a longer drawing, these three processes serve as my initial map for the figure, and usually take only a minute or two. From the beginning I had a tendency to be timid, tight, and small with my lines. This first map of the figure has given me the initial looseness, immediacy, and accuracy vital to making my drawing come alive. 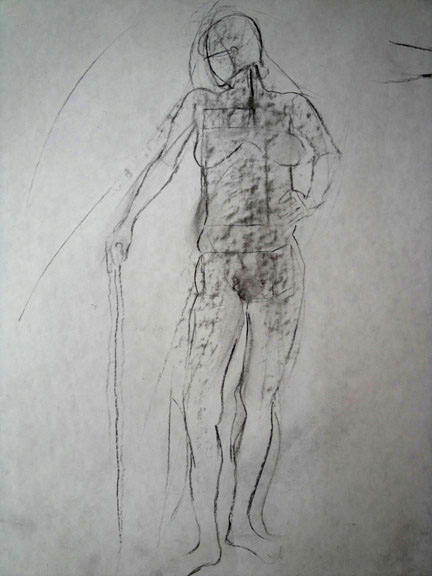 The next process was putting the figure into three dimensional boxes, and finding landmarks on the figure, such as the C of the ear, neck, shoulder girdle, cut-away of the ribs, sacral triangle, and pubic triangle. The boxes illustrate the plane change in the body, making it easy to construct figures in imagined positions with a realistic sense of light and shadow. Once we began to study the skeleton, I found I could also give the figure a feeling of perspective simply by projecting the pelvis, ribcage and skull into boxes.

In the beginning of the course I was overwhelmed and unsure of what to put on my paper. What small bit of light is important to describing the figure? What shadow confuses rather than clarifies? Where should I put a line? As I studied the underlying structure of bones and muscles I began to see the figure as geometric shapes, and understand how best to describe them using light and shadow. The studies we have done in Basic Drawing of spheres, cones, cylinders, and cubes have proved extraordinarily helpful. I began to forget my verbal identification with the figure, and to draw exactly what I was seeing, and more importantly, how to make the figure read on the page.

Usually after the initial stage of the drawing, I move to negative shape. I take my eyes off the figure, and draw the shape between arms and torso, between the legs, between the fingers. In concentrating on these shapes I trick my mind into forgetting any verbal identification I have with the figure, and any preconceived ideas of what an arm, or a leg is supposed to look like. The result is that I get the exact position and peculiarities of the pose.

We have done various other exercises with line quality and expression, but these processes serve as the foundation for more complex ideas such as cross contour shading. It would also be impossible to draw light and shadow without first understanding bone structure, muscles etc. Figure drawing is not only complex technically, but mentally, and the more time I spend on the foundation the more imbedded into my unconscious it becomes, so I no longer have to think about everything at all times. When I look at my drawings I realize that I am not just looking at a half an hour, or an hour of work, but two semesters of learning to see the figure in different ways.

In the last couple weeks my drawings have become, almost unconsciously, about what it is I am communicating through the drawing. Am I seeing the loneliness, or the exuberance of the figure? The heaviness, or the sensuality? Often what I draw startles me in the accuracy of its expression of what I am thinking or feeling. I am constantly confronted with myself through drawing the figure. And for me the beauty of the class is in learning how to communicate my thought process. 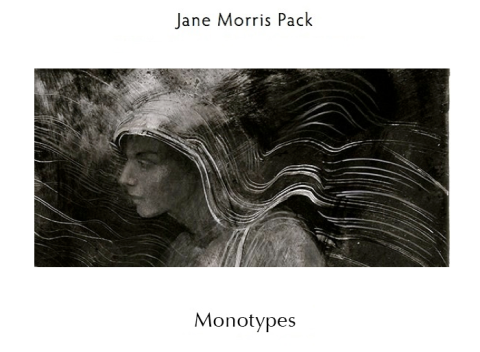 I have long appreciated and recommended for students the books of Robert Beverly Hale on drawing and anatomy. Robert Beverly Hale (1901 – 1985) was an artist, curator of American paintings at the Metropolitan Museum of Art, and instructor of artistic anatomy at the Art Students League of New York. I found his books many years ago and they transformed my teaching of life drawing. I don’t think students ever saw me coming to class without one of them tucked under my arm. The best of his books is “Drawing Lessons from the Great Masters”, but all the books are clearly written and packed with information.  Mr. Hale’s droll sense of humor and his passion for his subject are evident in the quotations in the side bars and the illustrations of master works are excellent as well as annotated. I believe they are the best books available about drawing technique on the market. This was obviously a man who knew his subject.

Last winter I purchased the DVD set of Lectures on Artistic Anatomy which were taped during the classes at the Art Students League with Robert Beverly Hale. There are ten discs and each contains one lecture with focus on one area of the figure such as the rib cage or the shoulder girdle.  The quality of the black and white video image is not very good as it is an amateur tape from over 30 years ago. Even so the lectures are well worth watching. It is a joy to see this man effortlessly create large scale drawings in charcoal while wearing a suit jacket and tie. He simplifies the vast subject of anatomy into manageable and  comprehensible segments while keeping things lively with the occasional joke.  Hale teaches a system which harks back to the Renaissance masters and emphasizes that drawing is a rational, decision making process.  He simplifies masses into geometric shapes and stresses how line is a magical tool to reveal those shapes in the drawing.

The DVDs are available for the students to view and many took advantage of this last term, showing up with their sketch books in hand  to view them.  In combination with the life drawing classes there was a great deal of progress in draughtsmanship over the semester. I learned an incredible amount from him and have adapted his methods by putting up an extra large drawing board for demonstrations. Students are asked to draw on top of projected master works to help clarify the knowledge of anatomy that we study with the live model. And we often share our favorite Bob Hale anecdotes in class.

I like the following quotation from Hale which is still appropriate though it refers to art education in the late 60’s.

Good drawing has declined tremendously in recent years, because if anyone draws well he is attacked as being sentimental or anecdotal. The result is that many teachers cannot draw well and neither can their pupils. Therefore they are doomed to create what I call geometrical or biological abstractions—Scotch plaid or turkey-dinner paintings. 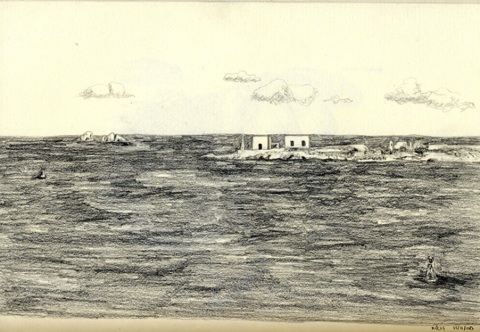 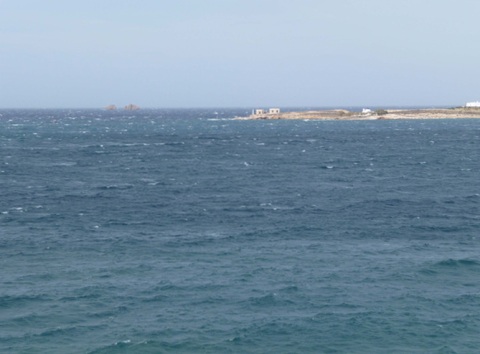 View from the Temple of Athena

I am from Sydney, Australia and I have come to The Aegean Center to develop my skills in the visual arts, to enrich my understanding of art history, and to enjoy Italian and Greek culture. I have just completed a Bachelor of Education (Hons) at the University of Sydney and am hoping to start working as a visual arts teacher next year. My university degree focused on education theory, art history and theory, and literature, but after graduation I felt that, as a teacher of the visual arts, I lacked knowledge of practical visual arts skills. While at The Aegean Center, I have been studying basic drawing, life drawing and oil painting. In addition to these set classes the school also offers more casual, extracurricular activities, like the Draw Club.

Draw Club meets in the school’s courtyard on Tuesday and Wednesday mornings at 9:00am. Here, under the olive tree, we draw the surrounding nature, still lives, and each other’s portraits. Draw Club is open to all students, including students who are not taking any drawing classes. Members often arrive sleepy-eyed to meetings, coffee in hand, but are very serious about the club and its longevity –- club t-shirts and other merchandise are currently being designed.

Most recently, Draw Club has been working with Jane Pack in re-designing the school’s logo. After brainstorming, tracing, cutting out and studying pigeons around Paroikia, the group has collaborated to come up with some wonderful designs.

The Temple of Athena

The Club has also ventured outside the school courtyard to draw from important cultural sites in town. Our visit to the Temple of Athena was particularly beautiful. The temple is situated on top of a hillside looking over the Aegean Sea. Many students took advantage of the clear day and drew the view from the temple. Others took the opportunity to study the ancient architecture and to closely observe the majesty of carved marble.

Draw Club offers students the opportunity to practice their drawing skills in a relaxed and social setting. It is an example of one of the many simple ways we can use the visual arts to enrich our everyday lives. When I return home I am planning on founding my own Draw Club!

You are currently browsing entries tagged with Drawing at The Chronicle.