I attended The Aegean Center for the Fine Arts last Fall 2008 and wrote a blog post at the end of the semester expressing my strong desire to return to the following session to complete a full year of study. Fortunately, after a short winter break of working, I was able to fulfill that vision and was delighted to arrive back in Paros two weeks ago. I have since resumed classes in painting, drawing, art history and Greek literature.

While I was home in CT between semesters, I traveled to the Metropolitan Museum of Art in New York City. I was amazed at how objects and paintings that I would have at one point rushed past now emerged from their displays with a historical context and meaning. I was able to adequately identify the importance of most of the artifacts and pieces of art, displayed not only in the Ancient Greek and Roman collection, but also in the Renaissance Art collection– what a great way to gauge how much I’d learned. My only regret was that Jeffrey, our art history teacher, didn’t materialize from behind one of the ancient marble statues to guide me through the rest of the museum as he’d done so many times before in Italy.

In between the Greek and Roman art and the Renaissance collection, I took a quick trip to the Egyptian collection and passed a room with earthy colored portraits painted on wood panels. Although some dated back to 2000 years ago, the color palette, emotion and mastery with which the portraits were painted reminded me almost of the Renaissance styles we had seen in Italy. I’d remembered seeing these paintings in the book The Mysterious Fayum Portraits, Faces from Ancient Egypt at the Aegean Center last semester and made a note to myself to take a closer look at it when I returned. Fortuitously, last weekend, the author of the book, Euphrosyne Doxiadis, visited the Aegean Center to give a guest lecture. Upon hearing about her presentation, I was reminded again of how important it is to see art in a comprehensive context and to understand the connection between the ancient world and the Renaissance. When approached in this holistic way, it is easy to view art’s continuity and progression over multiple centuries and the Fayum Portraits are an integral part of understanding the beginning of ‘western art’. 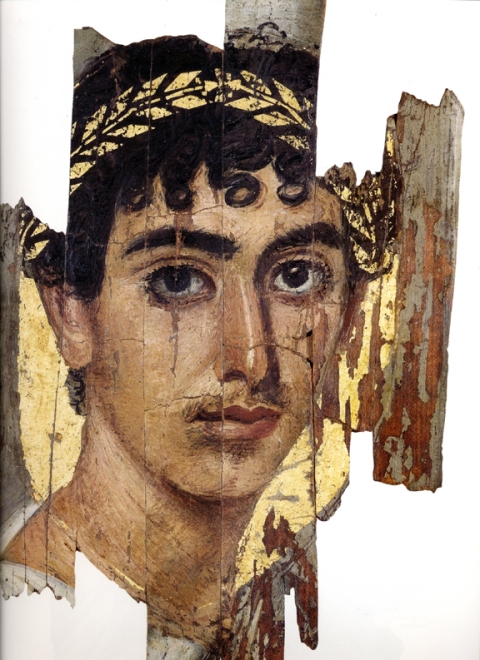 The Fayum portraits are a collection of paintings discovered in the Fayum, a valley near Cairo, dating to the Roman period, from the early 1st century AD and onwards (possibly to the 3rd century AD). Painted on wood panels or directly onto the linen cloth of burial wrappings, these portraits are an unbelievable discovery because they show us some of the only existing examples we have of paintings from the ancient world. While much pottery and sculptures have survived, paintings on wood and linen often don’t last long (let alone 2000 years) and we are fortunate that the low rainfall in the Fayum valley allowed for them to endure.

As Euphrosyne explained, in ancient Roman Egypt at the time of Christ, it was a Greek profession to paint the portraits of people living in Egypt and then have the paintings buried with them for passage into the afterlife. This Egyptian tradition speaks to the cultural emphasis that was put on death and life after it. As a result, the portraits are meant to portray the true essence of their subjects; that is, to capture them as individuals in life and not death. They are the means through which someone’s essence becomes eternal. To emphasize the sense of life that is infused in each of these portraits, Euphrosyne had us view them while she carried around a bundle of lavender stems and played an Egyptian dessert song.

Almost as if these portraits served their indelible purpose, thousands of years later, it is impossible to view them without feeling connected to the subjects portrayed. Each face is slightly different in form and color, but is consistent in its ability to engage the viewer completely. As John Pack commented, it is almost comforting to view the collection of faces again because they have become like old friends. There is a timeless and accessible quality to these paintings making them both current and unforgettable. As Euphrosyne explained, the Fauym paintings are “monuments of mourning” that venerate the people just as they are. She shared the poem, Tomb of Lanis, by the modern Greek poet, Constantine P. Cavafy, to better illustrate this.

Remember, Markos, that time you brought in
the famous Kyrenian painter from the Proconsul’s palace?
What artistic subtlety he used trying to persuade you both,
the minute he saw your friend,
that he absolutely must do him as Hyacinth-
in that way his portrait would come to be better known.

But your Lanis didn’t hire out his beauty like that;
reacting strongly, he told him to paint
neither Hyacinth nor anyone else,
but Lanis, son of Rametichos, an Alexandrian.

In addition to its broader relevance to our study of art right now, I also found this lecture particularly interesting for technical reasons given that we are learning about the earth palette and portraits in painting class right now. As if to even further infuse their portraits with life, the artists of the Fayum paintings would use only organic colors from the earth (black, burnt sienna, yellow ochre and white) to depict the skin color of their subjects. Any other colors were used on inorganic parts of the paintings, like clothing or jewelry. Given the fact that we are learning how to paint with the earth palette and I am in the process of painting flesh colors on two of my paintings, I felt that this lecture was both informative and inspirational. We are also learning more about portraits and how to effectively convey a subject’s essence based on their gesture, tilt of their head and expression on their faces. The Fayum portraits are an unbelievable discovery not only for their historical significance, but also for their contemporary contribution to artists and painting students. We were fortunate to have Euphrosyne Doxiadis join us last weekend and share her knowledge and passion on this topic.

You are currently browsing entries tagged with Cavafy at The Chronicle.