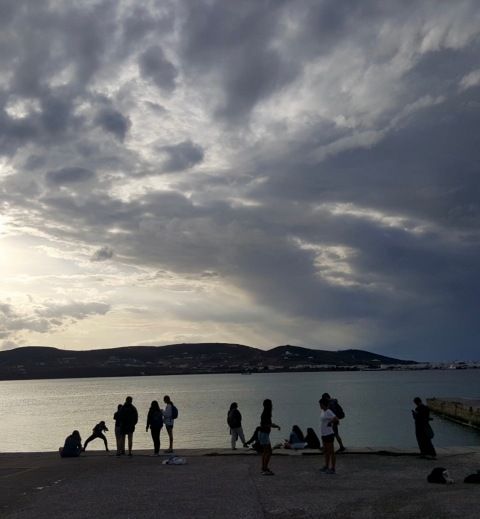 Clearing Storm at the end of a brilliant day

As the last days of October come in with clouds and cold winds, we have arrived at our half term break. Some of the students will be travelling, but the majority of the group are choosing to stay in Paros to work in the studios and the digital lab. It has been a busy and event filled semester. After returning from Italy we introduced the landscape of our lovely island with several hikes, the first was a walk above Lefkes to the inner valley beyond the windmills. There among the olive trees John read an entry from his journal from the time he lived on the Navajo Reservation in Arizona. It never fails to move his audience and this time there was a deep quiet as he finished. His words touched us all.

John reading from his journal under the olive trees

Last weekend we sailed around Antiparos with Captain Tasso and had a meal at Zombos, a restaurant at the southern end of the island facing Despotico. We had just strolled about the new excavations of the ancient temple, getting a glimpse into the working of the restorers who are rebuilding the facade of the temple. The winds came up as we finished our meal and Captain Tasso felt we needed to start back to avoid the oncoming storm. It caught up with us anyway and we all got wet, but the students sang and huddle together and we were rewarded with a full rainbow as we turned the corner toward Paros and home.

A few days ago Dimitra Skandalis gave a guest lecture on her work just before she returned to her new home in San Francisco. She shared her ideas and her passions with students and brought along some samples of the work she does with seaweed. She is a former student who is originally from Paros. Her exhibition at the school this summer was her first solo show here on the island.
Now with a much needed break to consolidate information and clarify goals, the students will come back to finish the semester work and prepare to display their efforts for the final exhibition in the first week of December.

Cliffs of volcanic detritus on the backside of Antiparos.

:Thanks, Ken Shiozawa, for the photos and being Student Extraordinaire

You are currently reading Half Way at The Chronicle.