The advanced painters this semester are examining the famous division between the merits of drawing versus color.  We have done some reading on the subject and are working on portraits using the two different methodologies. The drawing approach favors a study of form and a clear use of line and shading techniques to depict the geometry of the face. The coloristic approach seeks patches of color which border other colors to turn form and to show light. This requires a clear understanding of color mixing:  warm vs cool, light vs dark and pure vs neutral.

The debate between the merits of drawing versus color has been a long standing one. The most famous proponents of drawing were Florentines in the 16th century who disdained the colorists of Venice. Titian’s broken colorful brushstroke was to them evidence of poor draughtsmanship.   This debate was forwarded to each successive generation and finds such artists as Poussin and Rubens on opposing sides.  Ingres and Delacroix fought a similar battle.

The muscles and bones of the Florentine male nudes are perfect subjects for a drawn approach. Vasari rightly praised Michelangelo as the supreme master of this art. In Venice the preference for the female form in landscape was better suited to a coloristic handling. One thinks of the Giorgione nudes in the soft enveloping color of evening.  Subject matter may influence the choice of one method over another but it may simply be personal outlook or the type of training an artist receives which determines the way to proceed. The finite correct world of drawing appeals to the intellectual mind.  A line which describes a form is either correct or it is not. The color approach on the other hand captures a more fleeting, emotional, infinite world, one which shifts moment to moment with the changing light.

These two renderings of an eye show the different mindsets. On the left Sargent finds color swatches to depict the folds around the ball of the eye.  The painting by Christain Seybold on the right gives us a linear understanding of every part of the eye.  Although they both use color the priority given to line or to color is evident. 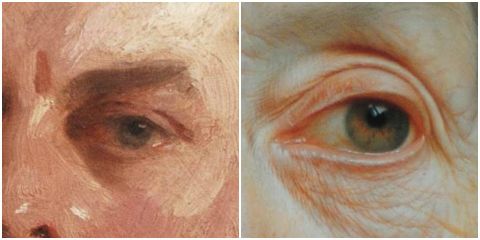 A paragraph from the story “The Unknown Masterpiece” by Balzac summarizes the confusion which arises when an artist is hovering between form and color. The master painter, Frenhofer, is critiquing a work by the painter, Porbus.

“Ah!” said the old man, “it is this! You have halted between two manners. You have hesitated between drawing and color, between the dogged attention to detail, the stiff precision of the German masters and the dazzling glow, the joyous exuberance of Italian painters. You have set yourself to imitate Hans Holbein and Titian, Albrecht Durer and Paul Veronese in a single picture. A magnificent ambition truly, but what has come of it? Your work has neither the severe charm of a dry execution nor the magical illusion of Italian chiaroscuro. Titian’s rich golden coloring poured into Albrecht Durer’s austere outlines has shattered them, like molten bronze bursting through the mold that is not strong enough to hold it. In other places the outlines have held firm, imprisoning and obscuring the magnificent, glowing flood of Venetian color. The drawing of the face is not perfect, the coloring is not perfect; traces of that unlucky indecision are to be seen everywhere. Unless you felt strong enough to fuse the two opposed manners in the fire of your own genius, you should have cast in your lot boldly with the one or the other, and so have obtained the unity which simulates one of the conditions of life itself. Your work is only true in the centres; your outlines are false, they project nothing, there is no hint of anything behind them. There is truth here,” said the old man, pointing to the breast of the Saint, “and again here,” he went on, indicating the rounded shoulder. “But there,” once more returning to the column of the throat, “everything is false. Let us go no further into detail, you would be disheartened.”

This charming story goes on to explore many aspects of the painter’s world. Balzac seems to have been a close listener to his painter friends and gives us this glimpse into studio practices.

Whether a contemporary painter favors color or drawing to construct an image is immaterial.  The debate about their relative merits is interesting to art historians and art connoisseurs.  But the art student is less confused about choices to be made when the two issues are separated and defined so that, unlike the young painter in Balzac’s story, one is not hesitating between the two worlds.

§ 3 Responses to Drawing vs Color

You are currently reading Drawing vs Color at The Chronicle.