At the Met Museum, January 12th

Before our winter trip to America, mostly to see our family in sunny San Diego, we invited friends and students of the Aegean Center to join us at the Metropolitan Museum of Art in NYC. (I don’t say former students, since I still think of them – of you – as ongoing students and colleagues.) We had done this two years ago, when twenty-five joined us. This year another twenty-five managed to come, and we made a rich day of it.

Most of these students heard about this on Facebook, so it seems the site is actually good for something other than exclamation points. And Elizabeth and I were delighted that so many are living in or near the city, or were there for the holidays. New York is our home city, and the labyrinthine Metropolitan is the museum we know best.

The oldest student was Drew Weidemann, whose pictures of the event can be found on Franklin Einspruch’s site, here: http://www.artblog.net/post/2012/01/carson. Drew, now a professional photographer (www.drewwiedemann.com) was a student twenty years ago, and Franklin was a student a few years later and then an assistant to Jane; now he is a painter and noted art critic. Christine Linclau, a student a mere decade ago, only found out at the last minute, and came down from her office at the museum, where she is digital librarian, to greet us all.  Jessica Freedman, working at a gallery, came at the end. The youngest – well, there were several nineteen year olds – was probably Anna Deming. None of our students, of course, is ignorant about art, its lessons and delights. And John Masters and Jackie Massari are again here on Paros, trying not to be too distracted by Aegean spring.

The Met is huge, and a selection must be planned. Since all of us had studied Greek art together, and most of us had studied Italian Renaissance art together in Italy, we naturally stayed close to the Mediterranean. But we also wandered.
Did the museum know we were coming? For it had mounted one of the best shows we have seen in years: “The Renaissance Portrait from Donatello to Bellini” – spacious room after room of Italian portraits from about 1425 to about 1515, by artists including Donatello, Filippo Lippi, Botticelli, Verrocchio, Ghirlandaio, Pisanello, Mantegna, Bellini, and Antonello da Messina. Our etesian September often focuses on the new conception of individuality the Italian cities achieved, not based entirely on mere class and lineage. Men and women wanted to be portrayed as they were, but with intimations of inner vitality and strength. In the Bargello Museum in Florence, I often point to Donatello’s terracotta bust of Niccolò da Uzzano as the first true example of this new sensibility; though that piece did not make the journey, Donatello’s silver Reliquary of Saint Rossore, from the Pisa Museum, did. 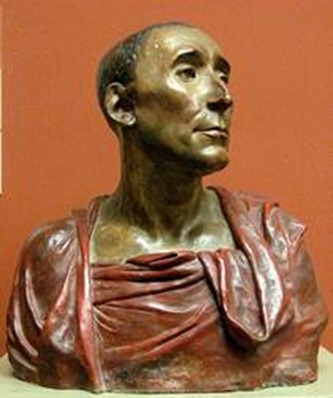 In the same room as this masterpiece, a realistic drawing by Fra Angelico again demonstrated that Fra Giovanni was not a mediaeval holdover but at the forefront of the new movement formulated by Brunelleschi and given theoretic expression in 1435 by Alberti, who wrote in his treatise on painting in 1435: “Painting represents the dead to the living many centuries later, so that they are recognized by spectators with pleasure and deep admiration for the artist.” We saw Botticelli at his most poetic, Ghirlandaio at his most psychologically profound, and Bellini at his most empathetic – this is as great as painting gets. 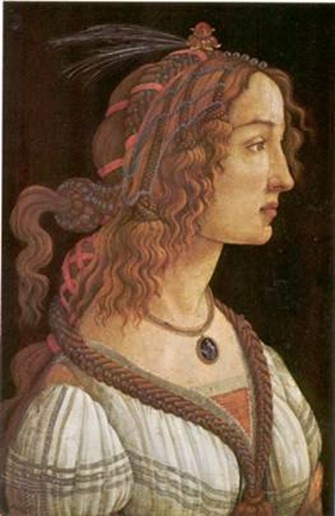 The exhibition’s sculpture was equally brilliant; it is often noted that, before Leonardo, painters followed the lead of sculptors. What age of sculpture has ever surpassed the Quattrocento from Donatello to Michelangelo, with stops along the way for Verrocchio, Desiderio, and Benedetto da Maiano? Benedetto’s two heads of Filippo Strozzi, a rich banker, were of especial fascination. The terracotta one, surely done from life, was meditative and detailed, while the marble one, in fulfillment of the commission, was more abstract and idealized. Going back and forth between them, one could see how the artist made the inner and outer man two aspects of a complete person, public and private, spiritual and political, sensitive and stern; it was astonishing. 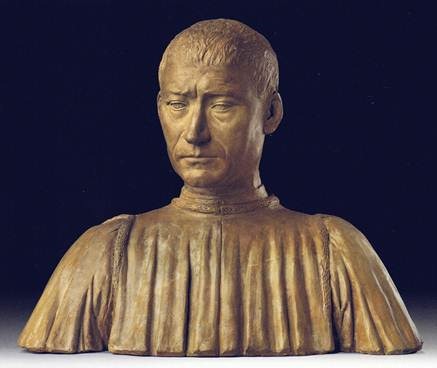 There were medals by Pisanello, drawings pricked for fresco translation by Ghirlandaio and Mantegna, illuminated manuscripts – and for some inexplicable reason, not too many people, so that we, a large group, could linger and discuss. But after our two-and-a-half hours in the show we were ready for a rest.

Meeting friends with whom one has much in common – in this case Paros, Italy, the Aegean Center, and art – is always a delight, and we lingered over lunch in the museum’s cafeteria. But then we got back to work, and going back nearly two thousand years, looked at Greek art, which so inspired the Italian Renaissance in its realism and craft, and is so different in its search for essential ideals, for the serenely heroic. Of course we visited the Girl with a Dove from Paros. I think most of us were thrilled that we could so readily compare what we were seeing with works we had studied together in Rome and Athens.

Athens and Florence, so disparate in time and culture, both believed that proportion, fidelity to nature, and reason were divine. Both were independent republics, whose citizens were extremely interested in the arts and so knowledgeable. And Venice and Paros made accommodation for sea light. There is more than one bloom of humanism, but its root is the respect for the individual in the world.

After a coffee break, we all opted for more: Titian, Rubens, Vermeer, and Velazquez. All in all, we were in the museum six hours, and left in high spirits, more exhilarated than tired. That is the effect art and knowledge are supposed to have. On the way out we stopped to contemplate the eagle from Giovanni Pisano’s great Pistoia pulpit, otherwise complete. Probably no one had looked at it, lost in its big mediaeval hall, for a year. Let this eagle be our inspiration till next time, and call us – Drew, Franklin, Christine, Anna, Lauren, Emily, Emily, Jackie, John, Christopher, Carter, Adrian, Shirin, Nikay, Jessica, Jessica, Kristin, Barbara, Brie, Arielle, Ves, Johanna, Jade, Michelle, Liz, and Jeff – to attention on what matters.

§ One Response to At the Met Museum, January 12th

You are currently reading At the Met Museum, January 12th at The Chronicle.