When lovers of Paros get together away from the beloved island, it is always an elite occasion. We know just what we miss, where we were, whither we should like to return.

When, during the spring semester of 2008, Liz and I told several students that in December we would be in New York City, where we grew up, to visit friends, relatives, and the Metropolitan Museum of Art, they importuned me to accompany them about the great museum, as I had so many museums in Italy as part of our September course of study. Usually Liz and I are so pressed for time in the city, that we can barely manage to visit one or two students, though often there are a dozen there. I agreed, and in early December sent out an announcement on Facebook that on December 22 Liz and I would meet any students who cared to join us in the museum’s lobby, and that we would proceed to look at great art, with plenty of blah-blah to go with it. 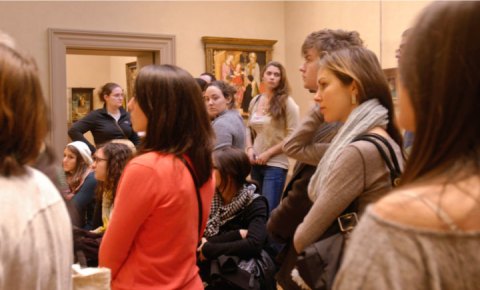 The delegated morning was cold, and there was snow on the ground. We arrived an hour early, and soon students began showing up. By the appointed hour, 20 students had arrived; three from a dozen years ago, three from a month ago. With them were a mother, a sister, a husband, a lover, and several friends – and memories of Paros and anticipated revisitngs introduced everyone. The first object we looked at, of course, was the Classical Girl with a Dove, a beautiful marble relief found more than a century ago, built into the Castro Wall on Paros. Its skill and tenderness made Paros glow in our minds. 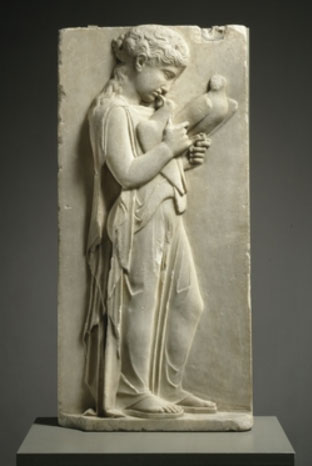 Since most of the students had studied with us in Pistoia as well as Paros, we next went to the medieval room, to inspect a sculpture that has probably not been looked at more than a dozen times in its long stay in the crowded room: the lectern, in the form of Saint John’s eagle, from Giovanni Pisano’s pulpit in the church of San Andrea in Pistoia; the rest of the pulpit fortunately remains in situ. Giovanni was probably Europe’s greatest sculptor in 1300. Dominating the room was the Met’s beautiful Christmas tree and crèche, with its eighteenth-century wooden figures from Naples. 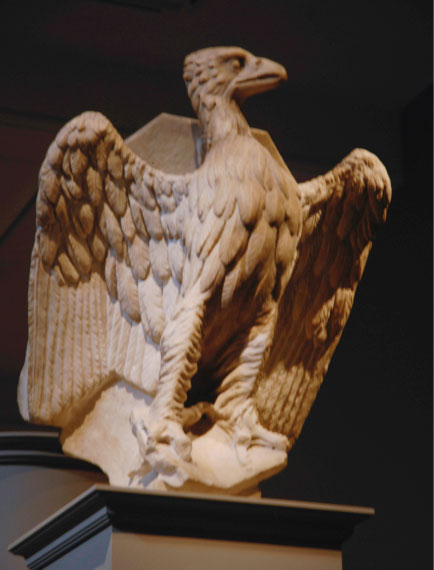 Then we went upstairs to look at paintings, beginning with Duccio’s little tiny Madonna, a recent acquisition and the museum’s most expensive. We had spent a long time looking at the great Duccio altarpiece in Siena, and were almost startled to discover that our memory of the radiance of its forms and colors were not exaggerated.

After an hour of Italian paintings, we moved on to Rubens, Hals, Rembrandt, and Vermeer. I don’t usually get to talk much about these artists, and lecturing focuses the attention. And although the museum was crowded for Christmas, the rooms with the greatest paintings were, as usual, sparsely inhabited. 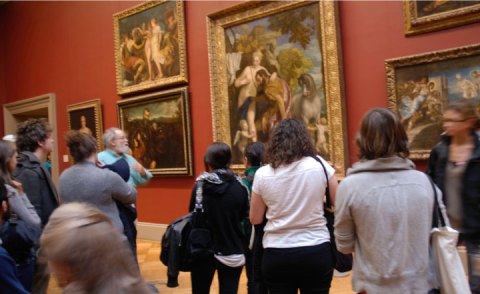 During lunch at the museum’s cafeteria we chatted, inevitably, about Paros. I was amazed and pleased to discover how many older students were still in the arts, and how many younger ones were hoping to remain so. May John, Jane, Elizabeth, and I take some credit (or blame) for this, and not just the inspiration of the beauties of Paros?

A year ago students under Jane had undertaken a Velazquez project, and the museum fortuitously had a small, choice show of the great Spanish master. And then, for the photography students, we looked at the big Robert Frank show. It was now three o’clock, and most of us had been there almost four hours. We parted reluctantly.

These were all top quality students, whose interest in art is unwavering. And it is the best students who are most likely to return to Paros, to remember what the island gave them, what the Aegean Center gave, and what they have given themselves. 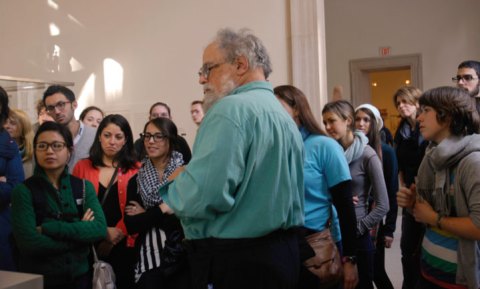 You are currently reading The Aegean Center @ New York’s Metropolitan Museum, December 22 at The Chronicle.