Adrian Eisenhower recently sent us the following update about his new exhibition of photographs from the inauguration, now showing at the bau gallery in Beacon, NY:

On January 18th, two days before the inauguration, I went down to DC with a friend and videographer, Vincent Galgano. I went to make a photographic essay of the event. I brought with me three cameras: a Rollieflex, a Leica, and a digital Nikon. After walking around the mall on the 19th, I chose to use only the Rollie. The day of the inauguration, the 20th, was hectic. Even with an early start we had to throw ourselves onto the metro train. When I was at the mall I photographed alone.

After processing the Plus X with Edwal’s FG-7 and 9% sodium sulfide solution, I scanned the negatives on an Epson Perfection 4490 with Silverfast software. I was able to print at the Masters School in NY, late night hours when the students were not around. The prints were made on Hahnemuhle paper with an Epson Stylus 4000 and K3 inks. The facilities were not quite as WYSISYG or controlled as those at the Center and required some getting used to. After some fumbling they proved to be adequate. 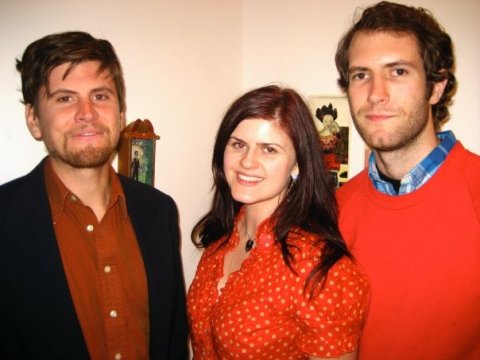 The images are currently a part of the show at a gallery in Beacon, NY called bau. The show, called XLIV, opened on the second Saturday of March. It was a festive evening, spared not of police, milkshakes and a Ukulele.  Shirin Borthwick, an alumna of the Center and graduate student of writing at Columbia (pictured above with me and Vincent), was able to attend.

You are currently reading Alumni Update: Adrian Eisenhower at The Chronicle.