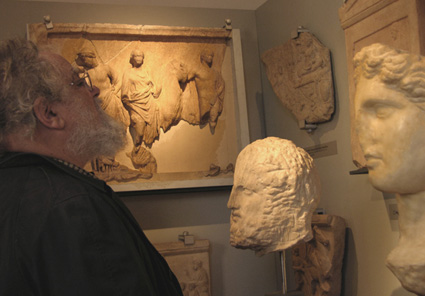 On Thursday, sunny and bright, we took the bus up along the Corso, and then walked a few blocks until we found the Casa di Goethe. Carefully refurbished, it opened a few years ago; this was our first visit. The exhibition was “Italians in Weimar: Italian drawings from the 16th to the 19th centuries.” Our kind of stuff: sheets by Carracci, Rosa, and others whose drawings are often better than their paintings. The permanent collection of Goethe memorabilia – letters, paintings, and such – was also worthy, and we stayed about an hour-and-a-half. Then we walked to the nearby Piazza del Popolo, but the church was closed. We browsed the Christmas stalls in the piazza, stopped into two small churches, and then took the bus, a small electric job, to the Ghetto, where we like an inexpensive little Jewish trattoria, where Liz had braised beef with rughetta and I tripa ala romana.

The previous day we had made reservations to visit the Palazzo Farnese. We had attempted several times in the past to get there, but success evaded us. Our reservation was accepted at the last minute – it is open only Thursday and Sunday afternoons, and one must take a tour in either Italian or French. The palace, the largest in Rome, is a High Renaissance masterpiece by Antonio da Sangallo; the top story and cornice are by Michelangelo. It has been the French embassy since 1874, and is immaculately maintained. When we got there, standing by one of the two fine fountains in the piazza, we realized that we had forgotten our reservation paper, and Gabriel ran back to the hotel to get it and also identification. Our tour was in French, but since we knew whereof our polite and pretty guide spoke, we understood well enough. What a beautiful place, quiet and polished: the “neoclassical” courtyard, the formal garden, the beige stone courtyard with travertine trim, all perfect. Perhaps the highlight is the Camerino frescoed by Annibale Carracci, Caravaggio’s great rival. It is tastefully lit and beautifully decorated, and contains fine classical statues in the niches; the mythological scenes of the Loves of the Gods are a dancing mixture of exuberance and restraint, libidinous and learned. Baroque decorative painting starts here.

We needed a walk. Off to San Eustachio to admire our machine, and to drink a cup. From there we went to San Luigi dei Francesi, which was in restauro, and thence to San Agostino to admire Caravaggio’s moving Madonna di Loreto (the peasant with the dirty feet), Raphael’s Michelangelesque Isaiah, Andrea Sansovino’s lovely marble Madonna and Child with Saint Anne, and Jacopo Sansovino’s fine but ickily venerated Madonna del Parto.

For dinner we all walked to a fancy place near the Farnese. It is fashionable and lively and has good food. Liz had tonno carpaccio and scallopini di limone. I had two-color pasta with ceci and clams. Fresh frutti di bosco suited all for dessert, and a Sicilian white wine proved extremely refreshing. The gently twinkling Christmas lights strung over many street of the Centro Storico echoed our mood accurately.

Back in the room, I thought to put the television on after I lay down, but fell asleep before I managed it. Liz was already asleep.

Friday again was sunny. Liz and I strolled about the Campo. Later, we went, mostly by bus, to the new Museo di Corso to see a great exhibition: “From Rembrandt to Vermeer: Civil values in 17th century Flemish and Dutch painting”. The museum is another refurbished old palazzo. There were two paintings by Rembrandt, a couple by Rubens, a couple by De Hoogh (one a masterpiece), and the general level was very high. They all came from Berlin’s Gemaldegalerie, and among them was Vermeer’s Woman with a Pearl Necklace, a masterpiece of the geometry of light. Elegantly dressed, she admires herself in a mirror on the wall. One of Vermeer’s great ones, it can be quietly contemplated for a long time. This was a perfect show for us, for it does not compete in the mind with Bellini – the sensibility is too different.

We went for a walk, and ended up at a shop where Jane had purchased a blouse on the preceding day. Liz bought a silk scarf. The shop’s owner took us to his girlfriend’s little restaurant, where we had lunch. We spoke Greek with her, who lived much of two decades in Rhodes. Liz and Jane had beef with various pâtés, I had a voluptuous crostone, and John had tiny gnocchi. After a walk past the Trevi fountain, we indulged in gelato at Giolitti.

John had booked tickets for a 5:00 o’clock concert in Sant’ Agnese, Borromini’s undulating church on the Piazza Navona. The church has been renovated, and though small feels spacious and sparkling; the over-the-top statuary is by Algardi’s followers. The concert was in Borromini’s sacristy, which has just reopened. An excellent Norwegian violinist played a Bach Partita, then a virtuosic modern piece, and then, accompanied by an Italian pianist, the Franck sonata, which I always enjoy, vulgar though it be.

We ate at an old favorite, Da Sergio, where I had boiled beef and cicoria. O.K., I admit it, I had another gelato for dessert.

You are currently reading Jeffrey Carson: December in Rome at The Chronicle.